One of the worst jobs I ever had was working in a pizza joint. There was the front section that people sat in and the back room where the kitchen were. You either were hired as a server or a cook. Both jobs were terrible, but being a cook was worse. Of course, I was a cook and it was horrible. The main reason my job stunk was the lack of air conditioning. The owner of the pizza joint decided to save money by only installing air conditioning in the seated section. The customers would get quality air conditioning while eating. The workers would be punished with no AC for an entire shift. Being right by the ovens with the grease, steam and heat was horrible. I would get so hot and sweaty that I was worried about dripping on the food. I think having no air conditioning in a pizza kitchen should be illegal. If I did not hydrate properly, I would frequently sway on my feet and see black spots. A couple of the other cooks have passed out before. The owner did not really care and would tell them it was their fault for not drinking. Installing the AC system would hardly cost him anything and would be easy to do. The dining area AC was a ductless system. Adding another air handler would have taken around 30 minutes to set up. I would have done the AC installation for free just to have AC. I think he was just too cheap and knew that he could get workers that would endure the lack of cooling. 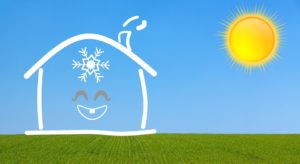