I visit my cousins often, and usually stay at a hotel. I do not like the idea of being a burden on others, especially relatives. Thus, using a hotel has been the best answer for me. The last time I visited them I made a reservation for myself and arrived late in the afternoon. I had never experienced any problems with hotel service before. The personnel are always friendly and bend over backwards to see to my comfort. This time, however, was different and there was an unexpected problem with the air conditioner. It made an annoying rattling noise that bothered me and would have prevented me from being able sleep. I needed to take care of it first before going to my cousins. I called the front desk to ask about a different room. The phone rang a dozen times and nobody picked up, so I went downstairs to talk to somebody at the front desk. The person there was friendly and apologetic but told me the hotel was full and no other rooms were available. I did not like that, but he said somebody would come and take care of the problem. Another hour passed until the maintenance worker arrived. He opened the HVAC unit and noticed a hotel ballpoint pen that somehow got into it. It was sitting on the blower and causing the rattling noise. He had only to remove it. While it was open, however, he was able to vacuum out all of the dust that collected. It had not been done for quite some time and really needed to be cleaned. It defies logic how a pen got into the cooling and heating system to begin with, but because of that the HVAC unit received some long overdue proper maintenance. 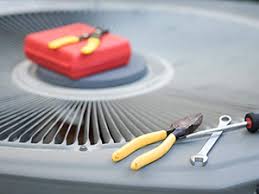