Making horror films back when I was in college. You see, I decided to major in business management – even though I still happily volunteered to work with film crews that were in the digital media program, because I wanted to be involved in any horror films they attempted to film. I still remember when I was on the set for this one horror movie being made for a film festival, and I was wearing a costume to look like some kind of monster; The trouble for me was that the set was pretty warm, because we were shooting outside in the summer time heat. It was evening, sure – but it was still over 85 degrees outside with high humidity as well! This caused issues for the makeup I needed to wear, as I was dripping with sweat so much that the makeup was running off me! After they reapplied the makeup, they had me rest directly in front of a big fan to stay cool. I would’ve gave anything to be shooting inside a house or something with an air conditioning system, or even an empty garage kept cool with a large central air conditioning system! I was so happy when the next scene was being shot inside an “abandoned home”, as the air conditioning system was running quietly through the whole shoot. I was able to comfortably be there, enjoying the indoor air levels and feeling less rushed to quickly do the scenes. Overall the experience was a pleasure to be involved in, and I told the people i’d be overjoyed to be in the next film they make – as long as they could guarantee an excellent air conditioning system on the set. 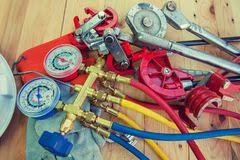