When I got home tonight from hanging out with our friends at a local steakhouse, our home was completely freezing on the inside! I wasn’t positive what in the world had happened, since when I left the home a few minutes ago, the home had been nice as well as hot as well as our control component had been set at around 80 degrees! The outside temperatures had been cooling off quite a bit while I was gone, but I hadn’t noticed a big time change in temperature throughout the night. So when I walked into the home as well as it felt just like an icebox or something like the A/C had been running on full blast from the very moment that I left, I was a little surprised. The first thing I did was walk over to our digital programmable control component control, which is located on the wall in the hallway by the patio. The temperature readout said that the interior temperature in the home was only 63 degrees! That’s super cold for being indoors! I tried to figure out what was wrong with the heating, but the control component still said that it was set to heating, not A/C. At the start I thought that maybe I had somehow turned the A/C on when I was setting the heat, but that didn’t seem to be true. I jogged down the stairs to the gas furnace, because I thought that perhaps the pilot light had somehow been blown out as well as that’s why the furnace wasn’t now working, but that wasn’t it either. I didn’t believe that the power had gone off as well as blown a fuse, so I was just stumped. I ended up flipping on the gas fireplace as well as now I’m huddled under a blanket by the fireplace to try as well as get some rest. I’m going to call our local heating as well as cooling corporation first thing in the morning to see if the people I was with and I can get this furnace problem wrapped up. 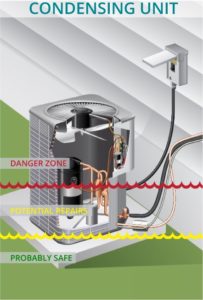