My family was ganging up against me.  My wife knows how I am with the thermostat.  She has known since before we got married. We have agreed to disagree about where the thermostat is set.  I like having it on the cool side, whether it is winter or summer. She has never groused about needing to wear a sweater in winter.  A lot of the time, she would go out and sit on the porch during the summer, just to warm up. It worked for us. When our kids started to get older, they thought it was okay to voice their opinion.  No one liked it being so cold, or so my daughter told me. My wife started to complain and said that she really wanted to have a place where she could where I was not the ruler. I just looked at her, because I never told any of them what they could or could not do.  I just took rule over the thermostat, but not them. She came to me one day and said she had been talking to a woman who works for the HVAC company. She had told her about Zone Control. Zone Control was a simple thing to install and it would not take long, nor be messy.  They simply installed valves into the ductwork that would push the heating and air conditioning from one area to another. I sat down and thought about Zone Control. The next day I called the HVAC company and had them install Zone Control into our home. Now everyone has their own place to go to find comfort with the heating and the air conditioning. 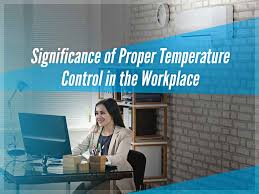